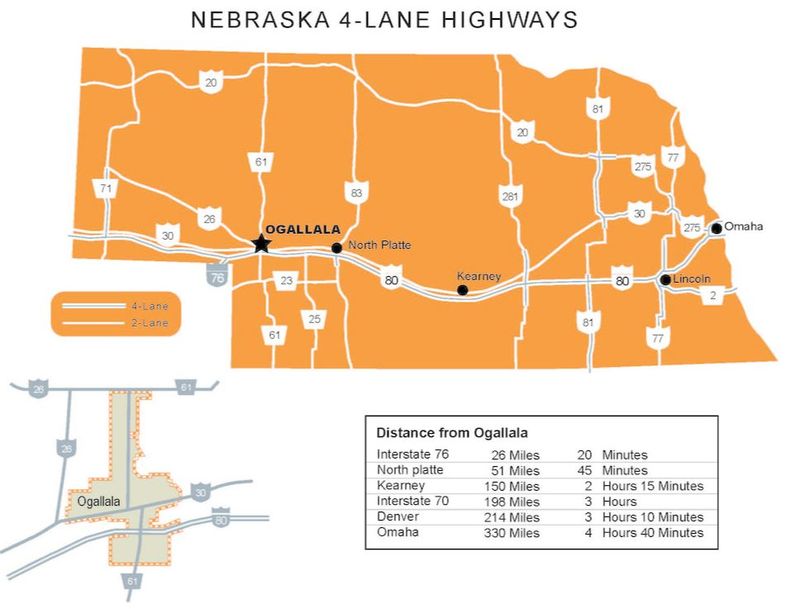 Ogallala, the county seat of Keith County, is located along I-80 in western Nebraska.  U.S. Highway 30, U.S. Highway 26, and Nebraska Highway 61 all intersect in Ogallala. Union Pacific Railroad has a line through Ogallala and BNSF also serves the area. The South Platte River flows through town and the North Platte River feeds into Lake McConaughy and Lake Ogallala, located 9 miles north of Ogallala.
*See attached Transportation map.

Truck:
More than 13,500 licensed motor carriers with worldwide connections are based in Nebraska and serve businesses throughout North America.

Air:
Searle Field, the municipal air field, is located two miles west of Ogallala. The airport has two paved and lighted runways (5,102 feet and 3,700 feet). Other facilities include pilots lounge, hangars, computer weather, 24 hour/7 day access by code, and self-serve 100 low-lead and jet A fuel. Twenty planes are hangered there. A full service mechanic is available. The elevation at the airport is 3,276 feet, the latitude is 41-07N, and the longitude is 101-46W.

Rail:
Ogallala is served by a main line of the Union Pacific Railroad, which has more than 1,000 miles of track through Nebraska and 32,000 miles of track in the western two thirds of the nation. UP's Bailey Yards, the worlds largest rail switch yard, is located in North Platte.

BNSF Rail road has more than 1,500 miles of track through Nebraska and transports more than 2 million carloads of freight per year.

Ogallala Public Transit provides door-to-door service in an area up to a one mile radius outside the Ogallala city limits.